I had been looking for a vegan alternative when making enchiladas that didn’t require beans. I decided to try making my own “ricotta” style filling using soaked cashews, which proved to be a great success. Another reason why I really liked this recipe was because I was able to let the summer vegetables from our garden be the star of the dish.

I started off by sautéing onions and poblano peppers – poblanos are super easy to grow and we had an abundance in our garden this year.  I did these up with some cumin and chipotle chili powder in my cast iron pan.

To make the “cheeze”, I soaked the cashews for an hour in boiling water – if you’re able to plan in advance, you can soak the cashews in regular water for a few hours instead.  Make sure you are using raw cashews – you can save a bit of money if you opt to buy cashew pieces instead of whole cashews. Trader Joe’s sells them in 1 pound bags which should make enough to serve 6 (or two pizzas).

In the food processor, I pureed the cashews with some salt, pepper, lemon juice and fresh cilantro.  I was going to post a recipe for this, but I forgot to keep track of how much I used.  Just taste the mixture – if you’re willing to eat it on its own, you’ve hit gold :). 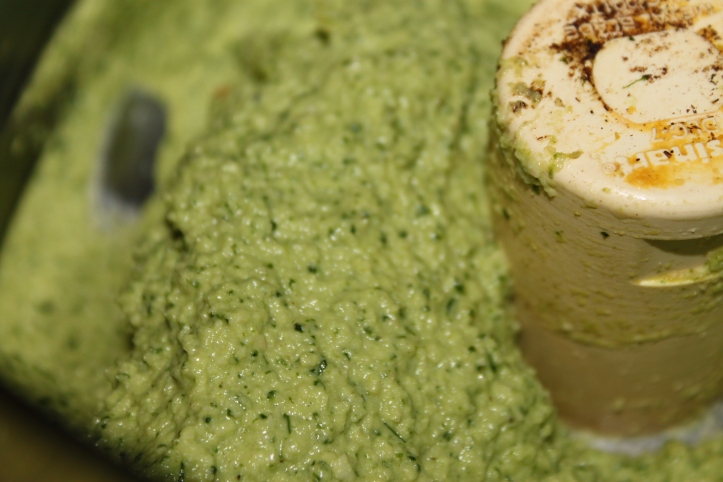 By the time I was ready to fill the enchiladas, I got a bit lazy, so I just layered the tortillas (I used corn tortillas to make the dish gluten-free) in a pan, followed by layers of “cheeze” and the pepper mixture.  I then baked it for about 30 minutes and served it with fresh avocado.

I’ve used this “cheeze” in lasagna as well as on pizza – instead of cilantro, I used fresh basil from the garden, which was just as delicious.  It also tastes great leftover the next day, so you can always make extra to pack a lunch or get a second meal out of it.