I love mustard.  Even as a child, I chose it over ketchup all the time.  Nobody else in my family has this infatuation with mustard (which is probably why I get weird looks when I eat an afternoon snack of mustard on a piece of toast).

As my tastes have matured, I’ve grown to like spicy mustards much more than good ol’ French’s.  I also use brown mustards to whip up a quick salad dressing with olive oil/vinegar/lemon juice – it seems to go well with almost any type of salad.

I recently ran out of brown mustard and am now coming dangerously close to running out of French’s.  Instead of adding it to my grocery list, I decided that I was going to put the two packets of mustard seeds in my pantry to use.

The recipe that I used produced a very strong mustard, although some of the flavour should mellow over time.  This will definitely clear your sinuses, so if you want something a bit more tame, just increase the ratio of yellow mustard seeds to black. Also, I opted out of adding turmeric to this recipe, because that is generally done to produce the colour we are used to seeing and actually doesn’t play any part in the recipe.  Besides, turmeric has a bitter aftertaste, and there’s enough flavour in this mustard already.

There are so many ways to spruce up this mustard by adding herbs, honey, chili peppers or even preserved fruit – the possibilities are endless! 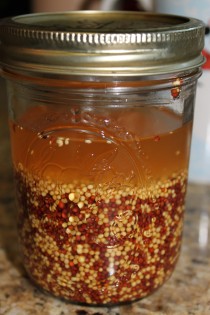 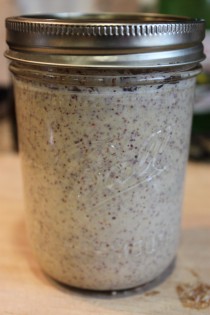