It’s SUMMER! And that means Fudgesicles!

How many of you remember going to the grocery store with your parents as a child during the summer and walking out with a box of popsicles of freezies? I loved summertime.  There was an N&D in the town I grew up in that always had huge sales on popsicles in the summer and I remember going with my parents to pick up different varieties of flavours – banana was my absolute favourite.

I’ve been looking for popsicle molds to have at home, but didn’t really feel like spending a lot of money on a set – that being said, I didn’t want the dollar store version either, because I had visions of disasters as you tried to take the popsicle out.  I was at Sur La Table a few weeks ago and found a set of Rocket Pops molds on clearance (and there’s nothing like a sale to get me excited!).

I decided to try out fudgesicles for my first recipe – it was a good first experiment, although I have lots of ideas for improvement.  This entire recipe was under 500 calories for 6 fudgesicles – it was not as sweet as store bought treats, but there’s a lot of flavour in this refreshing vegan treat.  I could have added a bit more agave nectar, and still kept this recipe under 100 calories per serving.

In a large measuring cup, use a stick blender to mix the following ingredients:

Use the measuring cup to pour mixture into molds – make sure to leave a bit of room at the top as the mixture will expand as it freezes. 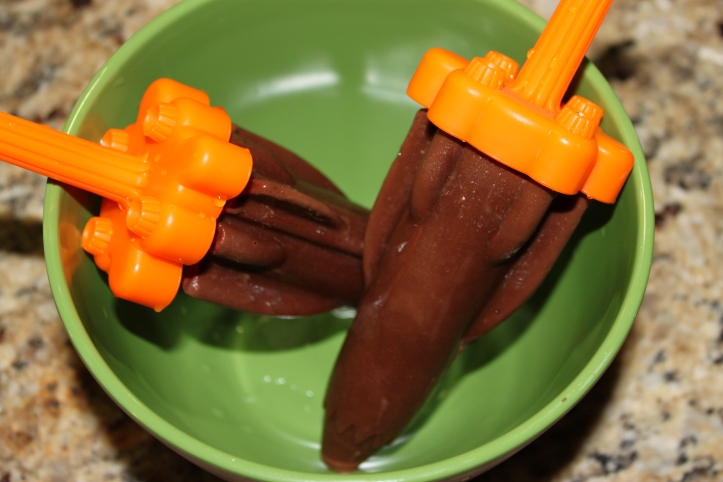